And now for the third try.* 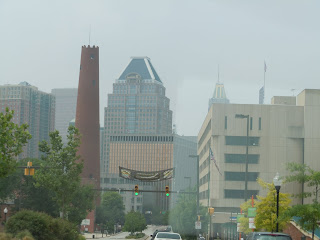 Baltimore.  This is downtown as you drive into the city.  It was a steamy day as you can see.  It's a pretty city down by the Inner Harbor.  There are lots of shops and attractions.


We got into town early enough to go to the Baltimore Museum of Art.  It's small but houses some nice stuff.  There were enough wood things to keep Pk's interest and lots of fibery bits for me and enough paintings and sculptures for both of us. 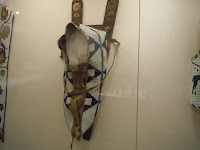 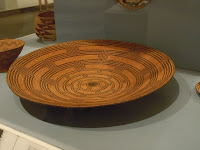 Like this cool basket and this backboard for a baby.  It was really interesting from far away and then I got up close and saw that it was covered in seed beads.  Thousands and thousands of seed beads.  The amount of work that went into this "useful object" floored me.
﻿
﻿ 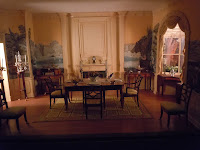 We had a good time wandering the museum.  They had a hallway filled with window boxes of miniature rooms.  I thought of Olivia and her miniature pears and smiled.  This whole room was about 12 inches tall.  I didn't think to put my hand in the photo for scale.  The details were so cool.  The lighting made it difficult to capture but you can see some of the bits if you enlarge the photo.
I think one of my favorite pieces was this bowl made of a hollowed out agate. 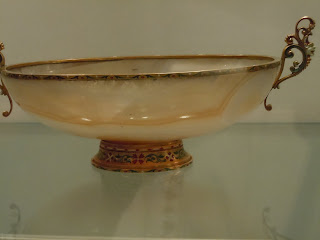 It was translucent and so fragile and beautiful.  It's a good thing it's behind glass.  I find museums to be some of the most frustrating places.  I like to touch things.  And of course, you're not allowed.  Don't you just want to put your fingertips on the smooth surface of this?  I wanted to touch the basket and see if it was rough or smooth and examine up close how it was woven and touch the fibers it was made of.

The guards would have frowned.

We spent a few short hours here (the museum is free all day every day which is cool) and were going to get some lunch but their restaurant was closed so we left to find our hotel and some lunch. 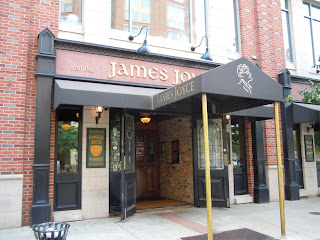 This place was directly across the street from the hotel and we figured we could get a burger or something since it was after 3 in the afternoon and the wedding was at 6.   It was what I imagine all Irish style pubs are like, at least all the ones here in the states.  It was full of dark panelling and televisions with soccer games.  We had some delicious burgers and then went to get washed up and dressed for the wedding. 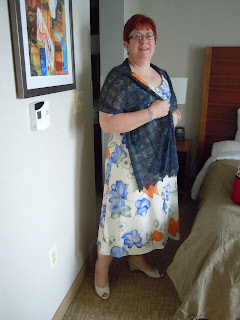 And here I am in my flowered dress and my shawl ready to leave.  It was so hot I was glad not to have to wear pants and a jacket with a long sleeved shirt.  Poor Pk.  He was very warm.  We had to walk about 4 blocks from our hotel to the wedding venue.  It wasn't a bad walk and my shoes were comfortable.  The wedding was lovely.  There was a chuppa made by the bride's mother and the bride and groom smashed a glass and everyone said Mazel Tov and it was beautiful.
Peter Kevin got the chance to visit with his sisters and brothers in law and we had a good time.  It was a good crowd and there was much laughter and talk until the music got too loud.
We got back to the room sometime around 11 and turned on the television to just relax.  I saw an episode of Grey's Anatomy and am now hooked.  I've watched all of season 1 and am working my way through the rest.  I have an addictive personality.  I knew of the show but had never seen it.  It's absorbing and I have to limit myself to just an hour and a half at night or I'll sit up till all hours and then fall asleep at my desk at work the next day.
We had brunch with Pk's family on Sunday morning and then headed home.  The ride was uneventful and took about 2 hours, not bad at all.  That drive can be murder on warm Sundays if you wait too late in the day.  People coming home from the Maryland shore.  Lots and lots of people.  We got lucky.
This week has gone by fairly quickly.  The weather has been more moderate and much more bearable.  For Father's Day this weekend, I'm taking Pk on a picnic.  The girls will be there and it will be a day to be grateful for the wonderful dad he's always been and continues to be. 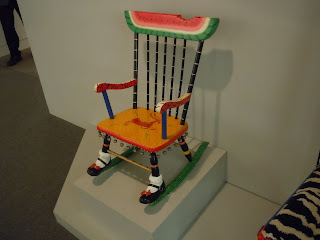 Oh, and one more museum photo.  Isn't this the cutest rocking chair?  Pk doesn't like painted wood objects but I love them.  I love the shoes and socks and the watermelon.  And it has bells on the seat so it would make noise as you rocked.  How cool is that?
So, we had a good time and are thinking of going back to Baltimore in the fall for our anniversary in October (our 30th!).  There's so much there to see.
And thankfully tomorrow is Friday.  After work we'll go to get Pk's Father's Day gift.  He's been waiting for an iphone 5 but Apple says not until next year. Instead he would like an ipad so we're getting together and giving him one.  I think he'll enjoy it.  It's technology, who am I kidding, he'll LOVE it.
So, have a good weekend.  I'm looking forward to having some family time and some good food and some laughs.  What more do you need?

*I tried twice before to post this but for some reason the photos wouldn't show up correctly and I had a terrible time.  I got frustrated and shut the computer off.  I figured I'd try again and Voila, it worked.
at June 16, 2011

Look at you in your finery - lovely! I feel sorry for men in summer having to wear long trousers etc too.

Sound like you had a great time away and a lovely weekend ahead. PK will LOVE his iPad!

Oh blah! I hate those steamy hot days!! I think getting to wear skirts is the trade off for having to shave our legs...lol!
An iPad huh? I'm getting Dr. MS a belt. WE're pretty lo-tech here! Ha ha!

Sounds like you had a good weekend. Love the shawl with your dress :-)

Thanks for posting a picture--lovely! We'd like to go to Baltimore, catch a Sox game at Camden Yards, and see the nice parts of the city. My husband has stayed there for work before. Oh, and if we took the train the boys would probably think it the perfect vacation!!

What a fun sounding trip. My MIL collects watermelons, so that rocking chair is awesome.

Grilltech and I got iPad's this week also, you're right, he'll love it!

Oh, I only dabbled in miniatures - that is serious stuff! I love that agate bowl too.

You look great, the shawl is great with the dress.

When I do lace demos, I always bring things people can touch, because it seems like so many textile people are like me, and want to handle things. If there's something I don't want touched, I put it in plastic. 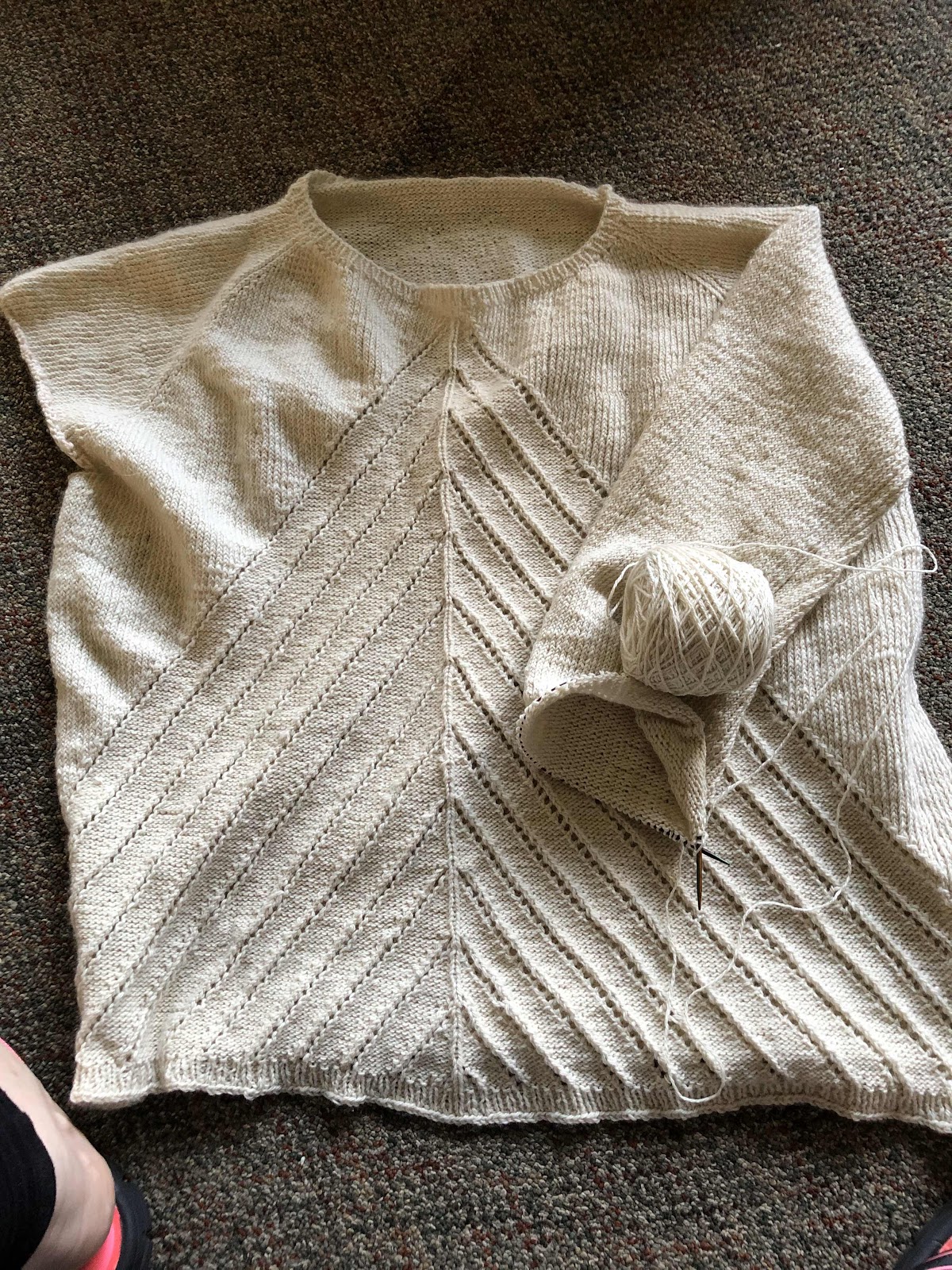